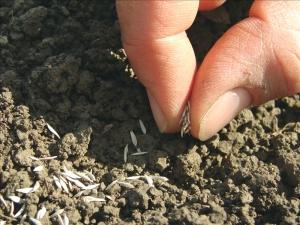 Grace and peace to you, from God our Creator and from Jesus Christ, our Savior, and Lord.  Amen.

“I can’t believe that something so tiny can have such a huge effect on me.”  The words were spoken by my friend, John, a new father, standing in the neo-natal intensive care unit.  His eyes welled up with tears as he watched is hours-old son, born prematurely, struggle for breath.  Over the next week or two, when I’d visit, we’d talk, we’d pray, and we’d drink a lot of coffee, as his son slowly grew in size, strength, and finally, to health.  John, who was kind of a big, crusty guy, told me “I never would have thought that I could be this emotionally wrecked, by something I could literally hold in the palm of my hand.”

I smiled, and I thought of the parable of the mustard seed.

There is truth in this parable…that the great things often come from the smallest of origins.  The mustard tree, which comes from one of the smallest of seeds, grows and spreads large.

This is a theme that we find throughout the scriptures, and, in all honesty, in contemporary books and stories as well:

Biblical stories like Moses vs. the Pharaoh, David vs. Goliath, Zacchaeus.  Movies like Rudy, Hoosiers, The Hobbit, and on and on.  We love these stories that celebrate the little, overcoming the giant obstacles.  And so naturally, this is the lens through which we most often look at the parable of the mustard seed.  From the tiny, comes the magnificent.

But I think there is probably more to this story.  Our tendency is to want to take these parables and simplify them; to turn them into a kind of an Aesop’s fable with a clear moral.  The problem is that the parables of Jesus were rarely like that.  They were simple stories but were interwoven with complex meanings.

That is the case with our Gospel today.   We are looking at just two short parables from a series of four in Mark’s fourth chapter.  And as is often the case, Jesus gives no explanation; just the stories.  So it’s easy to take them at face value.

But these two parables, these are the only two in the scriptures that Jesus says describe the Kingdom of God.  Other parables may describe our relationship with God, or with each other.  But these two, Jesus specifically sets aside as describing God’s Kingdom.  You might want to pull out your Bibles and take a look with me at Mark 4. Our Gospel lesson begins at verse 26 and goes through verse 34.

Interestingly, if you jump back to the beginning of the chapter, Jesus tells another well-known agricultural parable:  The parable of the sower.  Look at verse 4, it says that the farmer “sowed.”  To “sow” means to plant.  To sow is to plant precisely, putting the seeds right where you want them.  But jump down into our Gospel lesson for today, in verse 26, in the other parable about a different farmer, he says that this farmer “scattered.”  To scatter is…well…it’s to scatter.  Now remember that in the scriptures, almost nothing ever happens just by accident.  Jesus doesn’t just use these two words interchangeably.  He was intentional in choosing different words.  If your sowing, you’d have a plan…you’d know where you want the seeds to go; but to scatter seeds is to do something very different.

During Jesus’ time, good farm land could be hard to find.  Much of it was rocky, or weedy.  And if a farmer had access to good soil, they would sow their crops carefully, planting only where they were confident the seed would grow, seeking the maximum harvest.  They would never just scatter seeds, because they didn’t want to waste them.

So look in verse 26:  in our parable here, Jesus says that this farmer scatters, spreading seed wherever, without intention…without a plan, perhaps even extravagantly.  Time apparently passed, and then in verse 27, Jesus says that “the seed would sprout and grow, he (the farmer) does not know how.”  The farmer does not know how the seed grows.  Mark paints a picture of a farmer who scatters, and then just trusts an unseen force and an unfolding process.  He just fully expects a harvest, and then when the crops are ready, he takes them.

Then, without any transition, Jesus jumps into our second parable, beginning in verse 30.  This is the much more familiar parable of the mustard seed.  From the smallest of seeds, these large mustard plants take root and grow.

So we’ve got these two parables:  the farmer who scatters the seed and waits, and the mustard seed, the tiniest of seeds that grows to a large, wild plant.  According to Jesus, these two parables describe the Kingdom of God.

So what does this tell us?  What does this mean that the Kingdom of God is like…for you…for me? I think we can draw a couple of important truths from Jesus’ parables today.

The first is about trust.  Anybody else here just a bit of a control freak?  Yeah, I can be too.  I get an idea in my head of what I want something to be like, whether it’s an event here at church, or a family evening together at home, or even a sermon.  And then I tend to get really annoyed when my plans don’t come to complete fruition, on the timeline that I set.

But Jesus is telling us that to be in the Kingdom of God is to give up of control, and let God be God.  But that kind of trust is a challenge for us, and in all honesty, we, well, at least I, become frustrated when God isn’t getting God’s work done on my schedule.

Secondly, the power of the mustard seed parable is in the significance of the insignificant.  But we often think of it in the wrong way, as a victory; as the underdog coming out on top, and so we think of the plant of the mustard seed as a tall, arching tree.  Huge, and strong.  The reality is that the plant of the mustard seed was more of a shrub. It would grow more horizontally than vertically. It was considered invasive.  Once it took hold it would grow large and bushy, but then would rapidly spread and overtake a field, or a garden.  What do we learn from this?  The Kingdom of God is wired to grow…to spread…to be shared.   And like the farmer in the parable, we scatter seeds, and then we are blessed to watch to see what God is up to, and to participate in the harvest.  We scatter these small seeds, and we trust.

In the early 1950’s, farmer Clarence Mauerhan was known as the “Chili Pepper King” of Orange County, California.  He had vast farms that grew chilli peppers.  At that time, a mysterious buyer was paying top dollar for all of the farms in the area, but farmer Mauerhan would have none of it.  He was the lone holdout against huge payments for his land.  And he was the last farmer there after all his neighbors had sold out.  Finally it was revealed who was buying up all this land: someone named Walt Disney.  Mr. Disney said he planned on putting in an amusement park on the land, and needed Mr. Mauerhan’s farm for the parking lot.  But Mr. Mauerhan would have none of it:  “When I die I will own this land.  No one is taking it from me.”

So without any attorneys, man-to-man, Mauerhan and Disney struck a deal:  Mr. Mauerhan would own the land, and lease it to Walt Disney.  But Mr. Mauerhan insisted that since it was still his land, in addition, every car that parked on his land should pay him something.  They settled on 3 mills per car.  That’s three-tenths of a penny per vehicle; an insignificant amount of money, except when millions of cars park on this land in a year.  Suddenly the insignificant is a fortune that makes an extended family wealthy for generations.

Mr. Mauerhan was patient. He knew that the real benefit of his investment of land into the deal would not come immediately…in fact, it may not come at all.  There were many who thought Disney was crazy, and that this whole project was bound for failure.  But Mr. Mauerhan had grown to trust Disney’s vision, and he believed that while he could not control what was going to happen with the land, he would trust, and at the end of the day, there would be a great reward.

He put his faith the vision of Disney the architect.  He believed and invested in the significance of the insignificant.  He had faith in Disney’s plan for what would happen, and he was patient.  He knew that is often the seemingly small things that make the biggest impact.

We too, put our faith in the architect of creation.  God has a vision; a dream for God’s Kingdom here on earth.  And to live in God’s kingdom is to scatter seeds, to trust, to be patient, and to believe in the significance of the insignificant.

These things are done, not knowing the effect they will have, and not seeking any kind of reward or payback, but trusting in God that they will bring grace.

Often when we think of God’s kingdom, we think of the grand and the glorious.  And there certainly is overwhelming glory, beauty and joy.

But Jesus is also telling us here that the Kingdom is not always what we expect.  He is telling us that the Kingdom of God is about letting go of our need to control…of trusting, and letting God’s work be God’s work.  That we participate…that we may scatter these small seeds, but that ultimately, we must trust.  And that these seeds, though they may seem insignificant to us, grow and spread over great distances, sharing the grace and love of God to those who need to hear that Word.

Trust, patience, and the significance of the insignificant.  Ultimately, it was a seemingly insignificant act…the death of a man on a cross, a convicted criminal.  It happened all the time.  But that man was Jesus.  And this insignificant act became the pivotal point in human history.  It is God’s work, not ours and it brought grace and forgiveness to each of you.

What then is the Kingdom of God?  The Kingdom of God is experienced when we live, and share God’s love.  It is where we participate in the scattering of the seeds of God’s love, and wait, and watch God’s work.  It cannot be fit into our expectations, and it doesn’t happen on our schedule.  It uses the small and celebrates the insignificant. It is the work of God.  Trust the work of God.  Go from here today and scatter God’s love.  At the end of the day, it brings a magnificent, extravagant harvest: the grace and love of God, for all people.