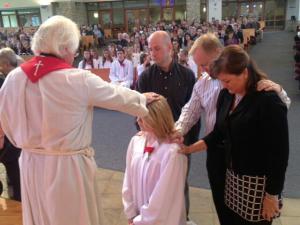 Grace and peace to you from God our Creator, and from Jesus, the Son of God, who is the light of the world!  Amen.

When I went to college, I was overjoyed to discover when I first registered, that I was only required to do one credit of physical education courses.  Phy. Ed. courses were never my favorite thing.  (My theory is, I only run when I’m being chased.)  So this was good, good news!  But then, I read the fine print of the course catalog.  These college people, they were tricky!  Each of the full semester phy. ed. courses was worth only an eighth of a credit.  This ruined my plan of slipping through college with only one phy. ed. course.  So I set a new goal:  I made it my mission to take as many of the strange and obscure phy. ed courses that I could.

While I couldn’t avoid some of the standard courses like running, or tennis, or flag footall, I did mange to take courses like “bowling”, “ballroom dance”, “badmitton” and “Archery.”

Archery was one of my favorites.  It involved no running, and did include projectiles; what’s not to like?  The class met on the concrete floor of the hockey arena.  So there were chairs surrounding the arena up high above the floor, and glass block windows behind the chairs.  Targets were up against one wall, and we would stand in front of each target in a line, and would take turns shooting arrows.

One day, I stood at my place in line.  I aimed.  I pulled back on the bow.  The arrow hit the target…About 6 inches from the bulls eye.  Only one problem: the arrow…it wasn’t mine.  I hadn’t shot yet.  Confused, I looked to my right; Karen, a woman in the next line, had a horrified and embarrassed look on her face.  She had shot, and had completely missed her target, hitting mine.  “Thanks!” I said.

The next time we were both up, I was curious, so I watched her out of the corner of my eye.  This time, she took her shot and instead of shooting straight toward the target, the arrow kind of lofted up in the air, tumbling end-over-end and landing with a clatter on the floor halfway to the target.  This got the Coach’s attention, as well as the rest of the class.  She was again, horribly embarrassed.

The third time our line came up to shoot, the whole class was pretty much watching Karen to see what would happen.  Karen notched the arrow, aimed in the general direction of the target, and pulled back on the bow.  Just before she released, she squeezed her eyes shut.  The third arrow launched and shot up over the target, over the hockey arena seats shattering one of the glass block windows and out of the building.

The coach had been standing behind Karen.  He leaned forward and whispered in her ear “open your eyes.”

I tell you this story because I believe that in many ways,  this is the way we live our faith lives.  We go through much of life with our eyes closed; Blind to the things going on in the world around us…blind to what God is up to in our own lives.  We spend time running around looking for evidence of God, but we don’t actually see what God is doing.

One of the things we’ve spent a lot of time talking about in confirmation is how God is working in the world.  We believe that God is active. God is at work.  And while this work isn’t invisible, sometimes it’s hard for us to see.

For something like 16 years, you’ve been on a journey of discovery.  You’ve studied the Bible, the creed, the Lord’s prayer…you’ve served, you’ve worshipped, you’ve gone on retreats, on mission trips, to camp… .  And today is about you owning the promises that your parents made back then, and it is about you claiming the promises that God made to you.  We want you to know that we, as a church, love you, and we are all very, very proud of you!

When all is said and done, however, confirmation ministry at Lord of Life is not about small groups and retreats.  It’s not even really about you.  It is about what God is doing within you and in the world.  It is about your recognizing how God transforming and changing you.  Today, it’s as if God stands behind you and whispers in your ear, “open your eyes.  See what I am up to.”

I tell you this as a confession.  I often don’t see things.  Sometimes it’s just the routine and the mundane.  My wife, Lori, swears that I have what she calls “Guy Disease.”  I can stare directly into the refrigerator, where the bottle of mayonnaise is right there, on the top shelf, and I can ask her “Honey, are we out of mayo?”  She’ll walk over, grab the jar from in front of my face and hand it to me.  I don’t understand why I didn’t see it.  I just don’t.  Dads, for how many of you is this true?  Moms, for how many of you is this true of your husbands?  (Note that more Mom’s raised their hands than Dads. Hmmm…)

Likewise, I can be blind to the ways of God.  I believe fully that God is working in the world.  I have seen the results of God’s work.  But when things are most difficult for me…when I am most in need of seeing God’s work; then I can be most blind to it.  When I am the most anxious about something in my life, when out of my anxiety, I grip tighter and tighter control, that is when I should be “eyes wide open”, looking for the work of God.  Instead, it’s as if I’ve grabbed the bow, squeezed my eyes shut and am drawing back the arrow.

This was certainly the case for the disciples.  The story:  Two followers were walking along the road one day near the village of Emmaus, some seven miles outside of the capital city of Jerusalem.  The two friends were depressed.  They felt this way because Jesus had been crucified, the disciples scattered, a hysterical woman named Mary claimed she had seen the Risen Christ, somebody had broken into the tomb and stolen the body, and the Jesus movement was done.  They were depressed, because their Lord, master and friend, Jesus had been killed, and it was all over.

As they walked, a stranger was soon walking with them.  The two friends told the stranger their story.  The stranger then started to teach them the Scriptures; when he did, something happened: the disciples described their hearts as burning with amazement.  The two friends invited the stranger to go with them that night and have dinner.  At the meal, the stranger took the bread, gave thanks, broke it and gave it to them.  In that sacramental moment, the two friends eyes were opened wide, and they realized that this stranger was Jesus; the resurrected Jesus.  Later they said “Did not our hearts burn within us when he opened up the Scriptures to us?”  They also said, “As he took the bread, offered thanks, broke the bread and gave it to them, he made himself known to us…”    Their eyes were opened wide, and they saw Jesus.

<begin walking toward the font>  At different times in our lives, we have these moments, when it’s almost as if God stands behind you and whispers in your ear “open your eyes.”  When you were brought to the water, and it was poured on your head, “in the name of the Father…in the name of the Son…in the name of the Holy Spirit…” you received the promises of God:  The promise of the gift of eternal life.  The promise of the forgiveness of sins.  The promise that wherever you go, God will know you each by name, and the promise that you are a part of a community of faith; a family where you are always welcome.  God raised you out of the water with a promise and a word.  The word?  Open your eyes…see Jesus.  See God in the world around you.

Our hope and prayer is that C3 has been full of “Eyes Wide Open” moments for you; moments where you experienced God in a new way; Moments where your heart burned because God’s love for you came alive.  I believe that our greatest need, the thing we strive for more than anything else, is a relationship with the God who seeks a relationship with you.  We spend our lives looking for how to have this relationship.  We sometimes try to fill the void with other things…success, ambition, greed, chemicals, whatever it may be…but nothing can fill that “God sized” space in our heart like the presence of Christ.  And the grace of God is for each one of you, whether your eyes are opened or not.  It is a constant.  It is always there.

So where do we see Christ?  Where do we find God?  I believe the story of the two disciples gives us a clue.  It was when Jesus read from the Scriptures that their hearts started to burn with amazement.  And it was when Jesus broke the bread in the meal that they recognized Him.  What does this tell us?

Today, at your confirmation, God stands behind you, leans forward and whispers in your ear “open your eyes.  See my work in your life.  Be in relationship with me.”  But remember that this is not a one-time event.  Now it is your responsibility is to remember that every day, when your feet hit the floor in the morning, God says “open your eyes.  See me today.”  Confirmation is not the end of a process; it is the beginning of a lifestyle.

May you live that lifestyle, full of the grace of God, and eyes wide open.