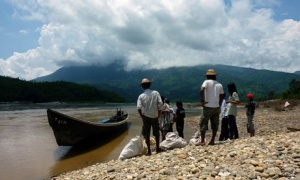 Grace and peace to you from God our Creator, and from Jesus the Messiah, who comes to each of us.  Amen.

Speak tenderly to Jerusalem,
and cry to her

that she has served her term,
that her penalty is paid,

that she has received from the Lord’s hand
double for all her sins.

Do you hear these words from the prophet Isaiah:  “They have served their term…the penalty is paid.”

And then Isaiah goes on:

“In the wilderness prepare the way of the Lord,
make straight in the desert a highway for our God.
Every valley shall be lifted up,
and every mountain and hill be made low;
the uneven ground shall become level,
and the rough places a plain.

Then the glory of the Lord shall be revealed,
and all people shall see it together,
for the mouth of the Lord has spoken.”

Isaiah was a prophet.  And we sometimes think of prophets as some kind of fortune-teller; like they predict the future.  That’s really not the case.  Prophets were not fortune-tellers, they were truth-tellers.  Their job description?  Pretty simple:  “Tell it like it is.”

The prophet Isaiah’s truth, is that there will be a distinct before, and an after.  There is a now, and a then.  There is an event coming…a tipping point…when everything…and I mean everything…was going to change.

For Isaiah, the world is very straightforward; it is very black and white.  Something was going to happen that was going to change the world…that would fulfill God’s promises.

To really “get what Isaiah means” I think we need to spend a little time thinking together about the context in which this reading, and our Gospel was written.

Remember that the key, primary event in the history of the Jewish people was the Exodus.  What Easter is to Christians, Exodus and the Passover are to the Jewish people.  And Passover remains their most significant religious celebration.

Well, remember that after Moses led the Israelites out of slavery and they were on their way to the promised land, they had a little bit of an “incident.”  While Moses was up on the mountain, receiving the 10 commandments from God, the people got impatient and created their own God, a golden calf, a false God that they worshipped.

The Israelites broke most of the commandments before they’d even received them, and this, of course, upset God, who decided that as a punishment, the Israelites would wander in the wilderness for 40 years before they were allowed to enter the promised land.  Basically, the generation of adults who had sinned would pretty much all die off before they arrived at their destination.

The geography of all of this is really important to understand.  So let’s pretend for a moment…let’s say that this section of the Sanctuary is the promised land…the new homeland…the land of milk and honey (don’t get cocky)…the place that would be home to the nation of Israel.  And this side of the Sanctuary…you are Jordan.  And the aisle in the middle?  This is the Jordan river…the division between these two regions.

Now Egypt…where the Israelites were enslaved.  That would be behind me…way back there…like back by Owatonna High School.  And so while their goal was to get from Egypt, up here to Israel, which should be a pretty straightforward trip, for 40 years, God caused them to wander…to circle…in the wilderness.  Can you imagine their frustration?

But after their wandering, the Israelites, now mostly the children of those who had left Egypt, had traveled up from Egypt, into Jordan, and found themselves here, at the bank of the Jordan River.

And finally, they are able to cross.  From slavery to freedom, from the wilderness to their new home.  From promise…to fulfillment.

So now jump ahead to the time of Jesus.  Our Gospel lesson for today introduces us to John the Baptist.

John was also a prophet of sorts; a truth teller.  The Messiah was coming, and John saw it as his job to get the people ready.

Now keep in mind that in the scriptures, almost nothing happens by accident.  There is a purpose for everything.

So it’s not a coincidence, but rather is deeply symbolic that when John does his baptisms, including the baptism of Jesus, he does it right here.  Standing in the waters of the Jordan river…the boundary between Jordan and Israel, between slavery and freedom,  between old and the new, between promise, and fulfillment.

What Mark is telling his readers, is that the way from promise to fulfillment, is through Christ.  Salvation comes through Jesus.  In fact, the first words of this Gospel, which many scholars believe are intended to be the title of the book, are “The beginning of the Good News of Jesus Christ, the Son of God.”   The good news!

But then Mark immediately goes to quoting this scripture from Isaiah.  Mark says:  “See, I am sending my messenger ahead of you, who will prepare your way; the voice of one crying out in the wilderness ‘Prepare the way of the Lord, make his paths straight,’

Mark’s readers were incredibly aware of their history, and of the story of the Exodus.  And for them to hear the promise that their paths would be made straight, compared with the 40 years of circling out there somewhere, wandering in the wilderness… receiving those words had to be a huge relief; like a cold drink of water on a hot, hot day.

I’ve experienced those times.  Part of growing up is discovering your identity…it is a matter of figuring out who you are relative to the rest of the world, and to God. And in that process, I know that many of us have struggled with our faith…with feeling distant from God.

In high school, while I was anchored pretty well to my home church, I did have my time of wandering.  I had my questions and my doubts.  God did sometimes feel distant.  And I visited several different kind of churches, just trying to find one that would settle my sense of spiritual angst.

I spent a lot of my time at the big youth group in town called “Pilgrim Fellowship.”  To be honest, mostly because the girls there were cute.

But there was still this distance that haunted me…

So I think that God, who has a great sense of humor, probably laughs just a bit at the irony of this wanderer now serving as a pastor.

But the sense of distance from God is real.  And sometimes we experience broken relationships, loss or tragedy that makes it seem like God’s back has been turned to us.

I remember how hard it was when I lost my Dad in 1999.  I remember being hurt and angry.  I remember that God felt distant from me at that time.

It’s like the story of the elderly farm couple driving through town in their old pick up truck.  They pull up at a stop sign behind a shiny, red convertible with a young couple in it…his arm around her, her head resting on his shoulder.  The farm wife turns to her husband and says: “Do you remember when we used to drive around like that?”  The husband looks sideways at his wife, who’s sitting across the cab of the truck and says “well, I haven’t moved.”

God is a constant.  And God sends Jesus to bridge the gap, to close the distance, and to bring our wandering to an end.

And for me, it was the persistent love of my family and friends who refused to leave me alone when I felt the most isolated that got me through these times.  They became God’s voice to me.  They were my prophets, my truth-tellers.  They were Jesus putting his arm around me.

Yes, God is with us as we move from Advent, a season of promise, across the river, to Christmas, the season of fulfillment.

So, this Advent, we are reminded that we are standing at the bank of the river.  We have wandered.  But we hear John the Baptist shouting: “Prepare the way of the Lord!”  And we can look ahead with with joy, because we know that we are almost there; that the Christ who comes on Christmas comes to usher us across the river.  That we move from death to life, from old to new, from promise to fulfillment.

Hear one last time these words from Isaiah:

”They have served their term…the penalty is paid.  They have received from the Lord’s hand double for all their sins.”

The penalty is paid.  Your wandering is coming to an end.  Your paths are made straight.  The Messiah is coming.  Watch, expect, and be ready.