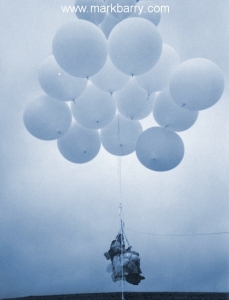 Grace and peace to you, from God our Creator and from Jesus Christ, who brings peace.  Amen.

This week, as we dig deeper into our book, I’ve been thinking a lot about chapter 5, called: “See the Wind.”  I’ve been thinking about fear, in this case the fear that nearly prevented Peter from being able to walk on the water; and how when he looked away from Jesus, and focused on the wind and the storm, he became afraid, and began to sink.

Everyone has fear.  It’s just true.  Everyone is scared of something.  And those who tell you that they have no fear?  Well, they are afraid of looking weak…so don’t believe them.

And we have to remember that fear isn’t necessarily a bad thing.  Our fear can protect us, most often from ourselves.

On July 2, 1982, Larry Walters, nicknamed “Lawnchair Larry” fulfilled a lifelong dream by attaching 45 weather balloons to a simple lawn chair from his back yard.  He had tethered the chair to the ground.  He climbed into the chair, carrying a camera, a CB radio, sandwiches, cold beer and a pellet gun and cut the tether.  He had anticipated floating about 30 feet above his back yard, floating there for a few hours, and then using the pellet gun to burst one balloon at a time until he gently touched back down.

But when he cut the rope, the chair shot up into the air at high speed.  Much to Larry’s surprise, his altitude quickly exceeded 15,000 feet and with no way to control his direction, he drifted from his home in San Pedro, California, into controlled airspace near Los Angeles International Airport.  And this, shall we say, was a problem.

So after 45 minutes in the sky, and realizing he was approaching the airport, he shot several of his balloons, before then accidentally dropping his pellet gun over the side.  But by then he had burst enough of his balloons that he slowly drifted down.  But before he landed, his balloons got entangled in power lines, causing a 20 minute power outage in the city of Long Beach.  And this, shall we say, was a problem.  But at this point, “Lawn-Chair Larry” was able to safely jump out of his chair and drop to the ground, where he was promptly arrested by the Long Beach police.

Regional FAA safety inspector Neal Savoy said, “We know he broke some part of the Federal Aviation Act, and as soon as we decide which part it is, some type of charge will be filed. If he had a pilot’s license, we’d suspend that. But he doesn’t.”

In the end, “Lawn-Chair Larry” was fined $4,000 for violations under U.S. Federal Aviation Regulations, including operating an aircraft within an airport traffic area “without establishing and maintaining two-way communications with the control tower.” Larry appealed, and the fine was reduced to $1,500.

After all of this happened, a reporter asked Larry “So were you scared?”  He gave it some thought, and then answered: “Apparently, not nearly scared enough.”

Fear can help us…it can keep us safe.  Fear can protect us from bad decisions that we, or those around us, might make.  Fear generally isn’t a problem until it morphs into anxiety.  Remember that there is a difference between fear and anxiety. Fear can be healthy; it can protect us, while anxiety can paralyze us.

So using these definitions, in the boat late at night, during that fierce storm, the disciple Peter felt fear, while the other 11 disciples, they felt anxiety.  Peter was able to move, the others were curled in the bottom of the boat, paralyzed.

So when Jesus said to Peter, his disciple “Come,”  Peter overcame his fear.  Peter looked out of the boat, saw Jesus and somehow knew that he was safe, and so he did something no human had ever done before:  He stepped onto water and walked.

How did he do that?  How did he overcome his natural fear to step over the side of that boat into the midst of that storm?  We might say he was courageous…as if it were as simple as him just drawing together the emotional energy necessary to overcome fear…and perhaps that’s correct.

But even more, I think there were two things that helped Peter.  And these two things are also required in order for us to face our fears and overcome the anxiety that stop us in our tracks…that keep us in our boats.

Peter was one of the original 12 disciples…and as one of those who had been with Jesus at the transfiguration, Peter has generally considered to have been one of the “inner circle” of disciples…those who were closest to Jesus.

In fact, according to the Gospel of John, it was when Jesus called Peter and the others to leave their fishing nets that Jesus recognized Peter’s leadership and gave him the name of “Cephas,” which translates into Peter and which means “The Rock.”  As in “You are the rock on which I will build my church.”

Peter was secure in his sense of who he was as a disciple, and a child of God.

Would that we all had that same sense of security.  We all question ourselves…our identity…our sense of who we are relative to God and to others.  In our culture we spend a lot of time concerned about our sense of self…”Self-esteem” has become a whole cottage industry, and we focus a lot of our energy on becoming all we can think we can be.  And there is value in this, don’t get me wrong.  But it’s only a part of the formula.

What would it be like if we tried to pay as much attention to “God-esteem” as we did “self-esteem?”  God-esteem:  In other words, instead of just trying to improve the way we see ourselves, what if we learned to look at ourselves, and others, the way that God looks at us?  What if we could see ourselves, and each other through God’s eyes?  What would that be like?

In the waters of baptism, God marks and claims us as His own.  God says “this is my beloved child, with whom I am well pleased.”  And when we are marked with the cross of Christ, God makes life-long promises to us.  Our identity, based in those promises, can be summed up in one phrase:  “Child of God.”

If we were as confident in who we were, in our identity, as Peter was, how might that change our perspective on life, love and risk?  How then would that affect our self-esteem?

Have you ever watched a small child, a toddler, walk towards its Mom or Dad?  Have you seen the look of anticipation in its face?  Have you seen the joy when the child reaches its parent?  Some of my most precious memories as a parent are when when I’d come home from a long trip, Nathan and Samuel were probably just two-footers, and their faces would just light up on seeing me and they’d run up to me with their arms wide open.  I imagine that was the look, they joy that Peter experienced when he and Jesus met, on the water.

It can be so easy for us to forget our identity.  There are many, many things in our culture that distract us and cause us to forget.  But as a child of God, loved beyond measure, when we look through the storm and see Jesus asking us to come, knowing that being with Jesus means being safe, our response is the same, and suddenly having the courage to step out of the boat is no longer in question.

First, child of God, you must remember your identity…

And second, you must know who Jesus is.

Peter was clear; Jesus was the Savior, the Messiah, the miracle-worker.  Peter had seen Jesus transfigured alongside Elijah and Moses.  He had seen Jesus feed the thousands.  Even now, he was watching Jesus walk out to them on the water, in the midst of a storm.

When Peter saw Jesus, it was crystal-clear to him that this was the Messiah.

Our faith never quite seems that clear to us, does it?  Sometimes it can seem like we’re looking through a clouded glass.  Sometimes the work of God doesn’t seem very clear to us at all.

But our problem is, when we can clearly see God, we often we confuse that with God being invisible; or even worse, not even present.

One of my very favorite questions to ask any group is “Where have you seen God today?”  The first time I ask that question, there is usually a confused silence; as in “I was supposed to see God today?”

An important part of any growing faith is developing the practice of looking and seeing what God is up to on any given day.

It’s often in the small and insignificant moments; it was in listening to Chris, our jr. high youth minister describe the conversation in the jr. high book study group last week.  It was deep and rich.  Clearly, God was in their midst.

It was in watching Kathy, a Trinity member, greet a family with their baby who came Friday afternoon to pick up food from the Wildcat Pantry.  That was a beautiful moment of welcome and hospitality.

It was in listening to a presentation about the work of the Owatonna Crisis Resource Center last week to our Outreach Commission.  Powerful stuff is happening there!

Jesus is present and at work, if we can just open our eyes and look through life’s storms to see.  Try it this week: At the end of every day, just ask yourself, “where did I see God at work today?”

And as confident as Peter was when he saw Jesus standing in the storm, we can be as confident in the presence of Christ in this church…in this community…in the world.

Fear can lead to anxiety, which can shut us down emotionally, spiritually and even physically.

Remember who you are.  You are a beloved child of God.  Know who Jesus is.  He is your Savior.  And he calls you to step beyond your fear, to step out of the boat and to walk with him.