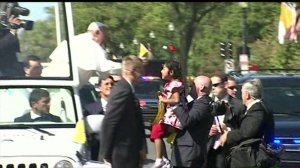 Grace and peace to you from God our Creator, and from Jesus, the Son of God and Savior of the world! Amen.

This week, the news has been dominated by coverage of the visit of Pope Francis. This is admittedly a huge deal, both because it is a visit by the leader of the largest and most influential Christian denomination in the world, and because of whom Pope Francis is as a person. He isn’t your average, everyday Pope. Many of the things he has said and actions he has taken have caught the world of the Catholic Church by surprise. In fact, there are days when if you tilt your head and squint, and listen really close, he might almost sound just sort of a little bit…maybe…possibly…Lutheran. <You go, Pope Francis!>

His focus on God’s grace…on promoting a faith of welcome and inclusivity…on humility…on accountability…on empowering the laity…many of the ways he is nudging the catholic church forward sound like echoes from the work of Martin Luther and the other reformers.

While there is no chance of my conversion to Catholicism any time soon, and I don’t buy in to the Catholic doctrine of the papacy, I am an admirer of this particular Pope. I like this guy!

An example: I was struck by something that happened a couple of days ago. You might have seen it in the news. The Pope was in a caravan, standing in his “Popemobile,” waving to the crowds, when a little girl, 5 year old Sophie Cruz, snuck through the barricades and tried to make her way to him. Of course, the Pope’s large, burly security detail intercepted her and tried to return her to the proper side of the barricade. But she kept pointing at the man Catholics call the Holy Father, and shouting “Papa, Papa…” Pope Francis noticed and gestured for her to be allowed through. She ran up to the motorcade, the Pope bent down, picked her up and she gave him a giant hug.

As he was setting her down, she gave him a letter with a picture she had colored. It was a letter asking him to intercede, because while she, at age 5, was born in the United States, her parents were illegal immigrants, who had been living and working in the US for the past 10 years, and now they faced possible deportation. “Please help them, Papa, she asked.” This little girl, being welcomed and held by Pope Francis, asking for something deep and meaningful: It’s a powerful image.

It reminds me of the image of Jesus in our Gospel lesson today. Jesus is still holding in his arms, the child that we heard about a couple of weeks ago. Then, the disciple John runs up to Jesus, and like a 3rd grade tattletale, says “Teacher, we saw someone casting out demons in your name and we tried to stop him because he is not one of us.”

In other words, “Jesus, he’s not authorized…he’s just using your name. He’s a faker, a poser, he’s gone rogue! We think you should put a stop to it.”

We can almost see Jesus rolling his eyes at John and the other disciples.

Jesus, points to the child on his lap and says “Look, it is better for someone to have a big rock, millstone tied around their neck and be thrown into the river than to put a stumbling block in front of someone like this child; someone who’s young, innocent or new to the faith.” What is the “stumbling block” that Jesus is referring to? Conflict. Infighting. Jealousy.

The context of this story is really important:

The early church was in conflict. Mark is using this story to address the problems the disciples are having with other Christians. Apparently the early Christian church wasn’t all united in their beliefs, sometimes clashed with each other, and occasionally even berated one another over differences in practice. There has been arguing and jealousy.

Jesus had to be frustrated. He had been teaching the disciples to turn away from selfishness and to put others first. He has rebuked them for thinking about how great they can be instead of how great God’s love is for all. And now this? His disciples seem to be locked in some kind of competitive thing with each other and now with some guy they haven’t even met yet who’s over in the next town healing people in Jesus’ name.

A few years ago I was in up Stillwater, waiting to meet my parents for dinner. I was early, so I was sitting on a retaining wall next to the walking path that runs along the St. Croix River. There were lots of people sitting there; just enjoying the beautiful day and watching the boats go by.

Shortly after I arrived, a van pulled up, the side door opened and 3 or 4 men in white, short-sleeved dress shirts and ties carrying Bibles climbed out and spread themselves out along that walkway. One settled in front of where I and a bunch of other people werewere sitting. He opened his Bible and he began to preach. And he went at it. With both passion and volume, he gave us his version of the Good news. Some folks got up and left, but a bunch of us stayed, determined not to be swayed from the beautiful location by this guy. After a few minutes, he pointed to someone 3 or 4 spaces down from me. “What about you? What do you do for a living?” he asks. She looks uncomfortable, but says “I’m an accountant.” The street preacher rambled for a moment or two about the evils of money, and of course accountants count money, ergo, she is evil and therefore going straight to hell.

Then the next person: “I sell cars.” “Putting your faith in money? Straight to hell.” Then one or two more people before he got to me. “I’m a Lutheran Pastor.” I said. Now that did catch him a little off guard, and he paused and looked at me. But then without much hesitation and no explanation, he just looked at me and said “Straight to hell too.”

Oh well. Have you had experiences like these, with the self-righteous, the judgmental? That was John talking to Jesus. And Jesus would have none of it.

Yes, there are differences between the doctrines and traditions of Christians. And yes, these differences can create tension. But tension is ok. Tension can be talked about…managed. We can learn from tension. But humans have this amazing ability to take tension and turn it into conflict. We divide ourselves up into “us” and “them.” And it’s not just around religion and our faith: Try politics, nations, states, towns, sports teams, political party, race, you name it…if there is a way for us to divide ourselves, we will do it, and usually with gusto. These are the kind of conflicts that Jesus is talking about in our Gospel.

When sociologists study people who have faith in God, but no religious affiliation with a religion or a church, do you know what they learn? That the number one reason these people don’t connect with the Christian church is that they perceive the church as being mostly about conflict and being judgmental. These people who become skeptical, they can love Jesus, but they’re not so sure about the rest of us. They are new to this whole faith thing. They are the innocent. And they are like the child who sat in Jesus’ arms that day.

That Jesus holds a child in his arms as he continues to teach is important. He is reminding the disciples that no one should get in the way of the faith of others. It’s a teachable moment for the disciples, and for us: The way of Jesus is not conflict. It is unity, even when we disagree. Sure, we can and will disagree, but it should not break us apart.

Because ultimately, the grace and mercy of God through Jesus is poured out for all of the world. Not just us…not just them…but all. God’s grace, love and mercy is intended for all. And that love is much stronger than any conflict.

So how do we follow in the way of Jesus? How do we focus onot on conflict but on unity? Jesus is clear. We stay focused.

And we stay focused on unity. We shouldn’t waste our time and energy on those small things that divide us. Jesus reminds that there shouldn’t be conflict or division among children of God. Like the disciples, we can step too quickly into conflict or jealousy. And we can forget to react with grace and love. But we also know that even as Jesus died on the cross, he overcame our sin and his own death and was raised again and ascended into heaven. For you. For all. This is the fundamental truth, greater than any of the small differences, that unites us as people of God.

The good news, thanks be to God, is that Jesus breaks down the barriers, so that we can approach our God, and reach out: “Papa, papa.” We come with our deep needs. We come with our requests. And God reaches out to us, picks us up, dusts us off and says “You are mine.”

Remember God’s great mercy, and that God calls us together to live in unity.

We, like the child in Jesus’ arms, are loved, accepted and freed to be the voice, the hands and feet of Jesus’ mercy for the world.

In the name of Jesus.