It was a beautiful summer Sunday afternoon, and I was driving a group of elementary age youth out to Bible camp.

There were around 60 kids on board the church’s , bright blue school bus, (named Zippy the Wonderbus.)  We had eaten lunch at church, then loaded the trailer, said a prayer, and now we were driving out highway 12 from the Twin Cities, headed west to camp.  Highway 12 is one of those state highways where you frequently have to slow down as you drive through these little towns.

We were just entering the town of Howard Lake when in the distance ahead of us I saw flashing police lights and a bunch of vehicles.  “oh no,” I thought to myself.  “I hope it’s not an accident.”

We slowed as we approached the police car.  He was directing the vehicles one at a time from the right, onto highway 12.  As I pulled up, he stopped the vehicle coming in from the right and then directed us to join the long lone of slow moving cars.

And then I realized:  It wasn’t a traffic jam, or a car accident.  Our busload of kids had become an unintentional float in the “Howard Lake Good Neighbor Days Parade.”  Yep.

So, what do you do?  I yelled back to all of the kids  “Everybody!  Quick get to the windows and start waving.”

And for just a short time, we were a float in the parade.  I’m sure the Howard Lake locals who these kids were…but the kids kept waving, and people waved back, so it was all good.  We actually felt a little bad that we didn’t have candy to throw.

After about 5 blocks on highway 12, another police officer was directing the parade to make a right turn, back towards downtown.  We just continued on straight and on to camp.

It was my first, and to date my only…accidental parade.

It makes me wonder what Jesus thought when he entered Jerusalem that day.  He knew what he was doing and where he had to go.  He knew that to fulfill the prophecy, he needed to enter Jerusalem on a colt, the foal of a donkey.

Did he know that he would become the object of a parade?  Did he know that people would line the streets shouting “Hosanna!  Hosanna in the highest!”?   I don’t know.  I don’t think that was his intent.  He was pretty focused on his mission: to fulfill the prophecy…to fulfill his ministry…death, and then resurrection and new life.

And as for the people of Jerusalem, the ones cheering on the parade route; Clearly they knew what he was.  They knew that he was the Savior.    That’s why they shouted the word “Hosanna!  Hosanna!”  which is a Hebrew word that literally translates to “Save us now, we pray!”

“Hosanna!  Save us now!”  It’s an interesting choice of words for a parade, isn’t it?  I don’t think they intended this like a person struggling in a pool, calling out to a lifeguard “save me!”  Rather I think they meant it as an identifier…”We know what you are…you’re the Savior!”

To say “Hosanna! Save us” means 3 things:

Second, it means that you feel stuck.  The Jewish people during Jesus’ time felt isolated, scattered and stuck.  They didn’t know what the future held, and their patience was wearing thin.  They knew they needed help.

And third, it means that you believe that the person to whom you’re shouting “Hosanna!” can save you.  You have faith in them.  When the Jewish people were shouting “Save us” they did so because with all their heart, they hoped and believed that Jesus was their “Savior.”

So, when the people were shouting “Hosanna!”  It was more than just cheering at a parade.  It was a deep, theological statement.  These people were proclaiming that:

And…they believed…that they could use some saving.  They shouted Hosanna, because they believed that their Savior had come to town.

These words, “Hosanna!  Save us now!”  resonate for me today.  They resonate because:

And today, to preserve health and safety:

And we will continue to have to set these things aside for awhile.  And that saddens me…that grieves me.  Because I deeply miss being together.  I miss your faces! 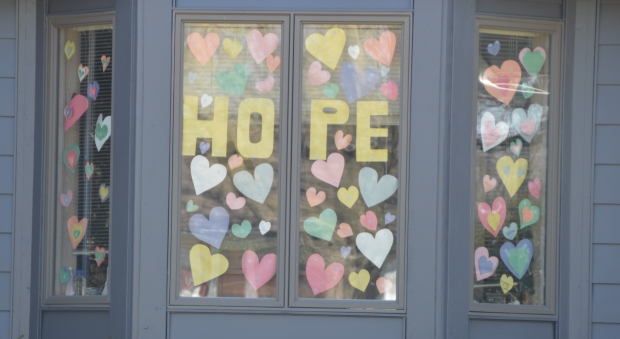 Lori and I went for a drive this past week.  We just needed to get out of the house.  So, we got into the car with our coffee, rolled the windows up tight and spent 20 minutes just driving around, trying to feel normal.

Hearts, and hearts, and hearts…we saw lots of hearts.  <Start Photos Here> Hearts on windows…hearts on doors…hearts in chalk on driveways…It was powerful to see so many people in our community uniting behind a common symbol.  To be honest, it really kind of affected me…it was a powerful emotional thing.

After we got home, it took me awhile to process it, to figure out why these simple hearts had affected me so.  And then I realized:

These hearts…the ones that so many people have put up on their homes…they are more than simply decoration.

These hearts are the spring, 2020, Owatonna, Minnesota, COVID-19 pandemic, quarantine version of the palm branches from our Gospel story.

But even more than that, these hearts, they are a deep theological statement.  They are a faith statement…they are a creed.  They say:

These hearts, they are our way today of saying “Hosanna!  Save us now!”  And they do 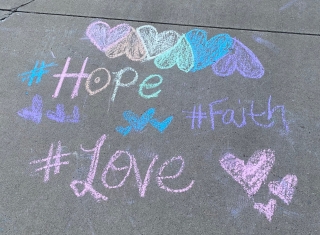 this not in a “we’re shouting out for a lifeguard” kind of way (though there may be days we feel that way) but rather they are a confession of faith, and a statement.  They are a sign of what God is up to here.

They are a sign, and a reminder that our Savior… that love…has come to town.

Love has come to town.  And love’s name, is Jesus.

My friends, we may be stuck indoors…we may be unable to gather.  But God has not abandoned us, and God is not done.  In fact, quite the opposite.  The Gospel story reminds us today that Jesus comes to town, and there is a parade…it’s not the parade we expect…not at all.  But Jesus walks our streets.  Jesus is in our homes.  Jesus has entered into our lives to remind us that we are not alone, and that whether we wave palms, or post hearts in the windows or shout the words “Hosanna, save us!”  Jesus is here.  The Savior is here.

And while we still will walk alongside Jesus through Maundy Thursday, Good Friday, the Easter vigil…and the corona virus and quarantine…all the way to the cross…we know that Easter is just a few days away.

And with Easter comes the promise of all things being made new.

Palm Sunday is a reminder, dear friends, that God is at work.  Through our community… through the palm branches we wave and the hearts we hang up…through the way we support each other and the ways we are supported.

Through Jesus, who saves us.

Keep your faith in that promise, as we hang hearts, wave palms, and shout to God “Hosanna!  Save us now.”

Thanks be to God.