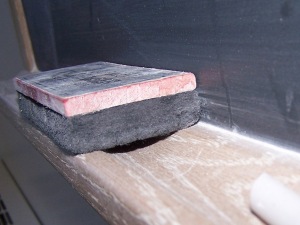 Grace and peace to you, from God our Creator and from Jesus Christ, who forgives.  Amen.

Last week was a big news week.  Between the 4 major Supreme Court decisions, the “Where’s Waldo” Eric Snowden case, the Trayvon Martin trial, Nelson Mandela’s health, the fires in the southwest and the President’s trade mission to Africa, there was a ton of stuff going on.  And I am a news and politics junkie.  I watch the news and politics like some people watch sports.  So I had high expectations last week when I checked the major news web sites.  The headlines I saw:  “Can We Forgive Paula Deen?”

Seriously?  A controversy over a woman who has a cooking show?  This is headline news?

But I guess really I shouldn’t be surprised.  Our culture has been fascinated with stories of human “fall” and “redemption” since Adam and Eve.

Trending news articles on Twitter in the last couple of weeks have included stories about:

These are all stories of fall and redemption…or in some of their cases, fall and more fall.

What’s fascinating to me is that we are presented with these people’s stories as if we are the ones who have the obligation to decide whether they are worthy of forgiveness; as if there is some larger cultural forgiveness that we get to decide to give or withhold.  I think steroids in sports are a bad idea, but really, Lance Armstrong hasn’t done anything to hurt me.  If anyone should be concerned about forgiving him, it’s his family, his teammates, his sponsors, and his competitors.

We don’t really know what’s happened in any of these people’s lives.  But what’s interesting to me is just how concerned we are with the question of forgiveness.

And if we are honest, we would admit that we have as much difficulty deciding about forgiving someone as our society does in dealing with these public figures.

It’s not easy to forgive and it’s impossible to forget.  And yet here is the petition we pray today as part of our sermon series on the Lord’s Prayer–we pray “forgive us our trespasses as we forgive those who trespass against us.”

As we examine this petition, we must begin with the word trespass.  Trespass is really kind of a strange word to use here.  To quote Inigo Montoya in “The Princess Bride,” “This word, I do not think it means what you think it means.”  In older versions of the Lord’s Prayer, we used the word debts.  Now we use trespasses.

But today, we have a hard time being this honest.  We look at the 10 Commandments and say, “Well, I haven’t killed anyone,” overlooking the fact that you can kill someone’s spirit with your words.

Sin is defined broadly as anything that separates us from God.  Anything.  And lest you think I am just picking on you today, let me say very clearly that I am a sinner too. Our confession reminds us that we are held captive to sin, and cannot free ourselves.  So the question then becomes, how do we handle that?  What do we do?

I believe that there are three options:

Ok, I know that school is out for summer, but as an exercise, let’s do a little math together.  Let’s think about our own financial debt. I did a little research and found that according to the Federal Reserve Bank, if you add up the average household of 4’s debt load, including a home mortgage, a second mortgage, car loans, credit card loans, student loans and each member of the family’s share of the national debt, the total amount owed is $506,350. I can see from your faces that some of you are feeling pretty good; your debt level is much less than that.  Others maybe wish I hadn’t brought it up.

Ok, but now imagine that on Monday morning you started calling around asking people to forgive you these debts.  Wipe them clean.  “Yes, hello Wells Fargo? I’ve got a mortgage with your bank that I don’t want the pay anymore.  Would you mind just marking it paid in full?  Thanks!”

“Hello, Mr. VISA.  You know I’ve let my VISA bill get a little out of control.  What do you say we just start over at 0, and I’ll be more careful next time.”

We probably wouldn’t get very far in these conversations, would we?  And yet we say exactly the same thing to God when we pray, forgive us our sins.  We are saying, “Wipe the slate clean.  Even though I don’t deserve it, let’s just start over from scratch.”  And the amazing thing is that God says yes. Because of Jesus, our debt is wiped clean.  God doesn’t want sin to get in the way of our relationship with him and so he forgives us.

There’s a Nintendo game called Super Mario Brothers that I quit playing with my kids because they beat me so badly at it.  It has one scene where Mario stands in front of a brick wall and he punches out this wall, one brick at a time.

Well, this prayer, the Lord’s Prayer, punches out the wall of sin that stands between us and God.  God hears our prayer, and because God loves us, God removes the sin; God wipes out the debt.  This prayer, it puts us back into right relationship with God. That’s what we pray for when we pray, “Forgive us our sins.”

But then there’s a second part to this petition.  It continues “as we forgive those who sin against us.”  Not just forgive me–but help me to forgive others too.  This begs the question: who has sinned against you?

Pick someone off this list, or someone else you know.  Have you forgiven them?  Have you?  Do you carry a grudge?  Do you have a hard time letting go?  Yeah.  We all struggle with that.

Peter asked Jesus, “How many times should I forgive my brother who sins against me?  Seven times?”  Peter thought he was being generous.  Jewish law required forgiving someone only three times before shunning them.  Peter doubled that and added one for good measure.  Seven times?

But Jesus blew Peter away:  “Not 7 times, but 77,” and even that number is really just symbolic.  Jesus was saying that Christians are to be forgiving people.

If you don’t forgive, I guarantee you, you will be filled with cynicism, anger, bitterness.  If you do forgive, it doesn’t remove all the pain of sin.  But it helps you to go on.  It allows you to move ahead with your life.

I don’t pretend that to forgive is an easy thing.  I know it isn’t.  But when you want to learn how to do something, you look to the experts and you follow their path.

I’ve spoken before about FBI agents, and how they are trained to spot counterfeit bills.  They do it, not with counterfeit bills but with real money.  An FBI agent spends hours learning to recognize authentic currency.  An agent studies a bill—the look…the feel…the details…the colors.  That way, when FBI agents find counterfeit bills, they immediately recognize them as such.  They know what they’re looking for.  They are specialists in the authentic…in the truth.

When Christians want to look at the truth, they look at Jesus.  We see him on the cross.  An innocent man, totally blameless, crucified to his death.  And what does he say while hanging on the cross?  “Father, forgive them for they know not what they do.”  Examine this Jesus closely. Look at him.  Memorize him.  Understand him.  He is love.  He is forgiveness.  Real.  Pure.  Authentic.  Absolute.

And because of him, you receive forgiveness.  This is why we can forgive others; because first, God forgives.  We are forgiven, and then we forgive.  As Christians, this is the way God calls us to.  It is a way that makes us whole.  Forgiveness is the way of Jesus.

Pray the prayer that Jesus taught.  Forgive us our trespasses, as we forgive those who trespass against us.  Receive God’s forgiveness, and be empowered to forgive those who have hurt you.  This prayer, this is Jesus’ way, and it is God’s gift to you.