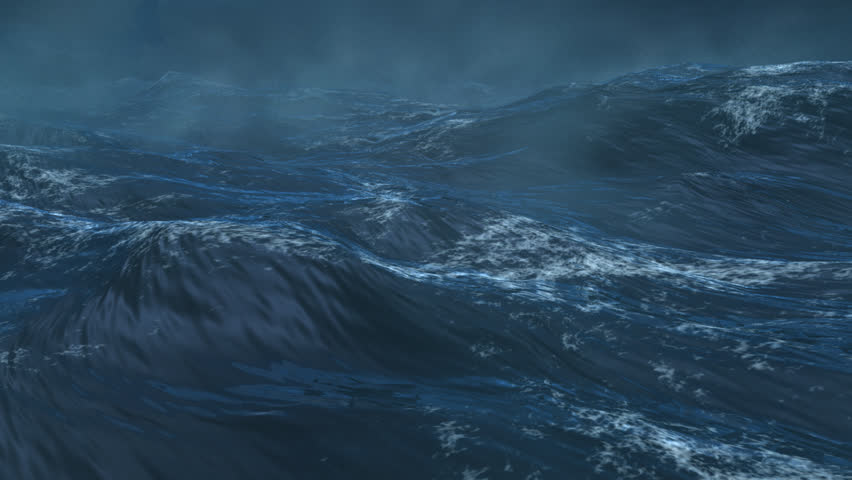 The power of water is an amazing thing to witness.

Certainly, we saw that earlier this week.  The heavy rains Thursday and the flooding between here and Rochester were a stark reminder of what water can do.

At an earlier stage of my life, I spent a lot of time on the water, in canoes. Our family owned a canoe we’d take it out…Friends and I would paddle the Minnehaha Creek, from Lake Minnetonka all the way to Minnehaha Falls; it was a great day-trip.  Or, growing up, I’d go on trips to the Boundary Waters Canoe Area with my Dad, or with friends. And in college, while working at one of our ELCA Bible Camps, I’d lead canoe trips on the Namekogen and St. Croix rivers in Wisconsin.

One weekend, a group of friends and I went to Northwest Wisconsin to go camping, and to paddle the Brule River.  The Brule is this beautiful, serene river that runs north and empties into Lake Superior.  It has these three sections of pretty strong white water.  We were full of youthful spunk…and were maybe just a tiny bit…ok, maybe a lot…overconfident.

It had rained the night before, and the water was high and fast.  In fact, the river was running so high, and so fast, that the outfitters on the river had decided it was too dangerous and pulled all of their groups off of the river.

In hindsight, that would have been good information for us to know before we started paddling.  We were in way over our heads.   Literally and figuratively.

When we came around a bend in the river and I saw the strength of the first set of rapids, I just said (out loud)  “uh oh.”  My paddling partner, who was kind of a canoe novice, turned and looked at me, and said “what do you mean “uh oh?”  I replied by yelling at the top of my lungs: “paddle faster!”  It didn’t matter: the canoe flipped, and both were tossed out.  We held on to the canoe and rode it out through the rapids, bouncing off of rocks like pinballs along the way.

At the next set of rapids, we all stopped paddling in shock when we saw someone else’s aluminum canoe that had hit a giant boulder broadside and the force of the current had crushed and wrapped it around the boulder.  And again, we got tossed.

At the third rapids, we just surrendered, and let ourselves fall out of the canoe before being tossed.

When we pulled out of the river, bruised, a little bloody and with our egos pretty battered, we were a combination of terror and adrenaline.  And we swore to each other, “Nope.  Never again are we doing that.  Never again.”

The power of water is an amazing thing to witness. 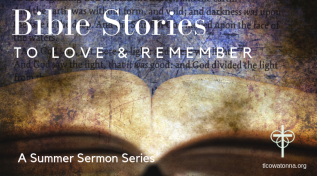 As we continue our summer sermon series on “Bible Stories to Love and Remember,” we look at a familiar water story: Noah and the Ark.  The story begins with God seeing “that the wickedness of humankind was great in the earth, and that the thoughts of the people’s hearts was only evil.”  And the scripture says that God grieved this, and that God regretted having made humans and that God decided to start over.  So to start over, God warns Noah to build an ark to preserve his family and two of every animal species, and then wipe everything else out.  And then came the rain.

So, can you imagine what it must have been like inside of the ark, as it rained and stormed for 40 days and 40 nights?

Now, we’ve taken this amazing story and turned it into a lovely picturesque children’s story.  In the Buegler home our boy’s nursery was decorated in a “Noah’s Ark” theme, complete with the Noah’s Ark lamp, the Noah’s ark bed spread, the Noah’s ark wall hanging, the Noah’s ark toys, and of course, the Noah’s ark mobile hanging over the crib.  It was all very cute!  It was a very beautiful “G” rated version of this story

But in real life, can you imagine the noise, the smell, the terror and the exhaustion as Noah and his family sat on that ark, with the rain and the storms raging outside?  Noah and his family lived in the middle east…in an arid, desert region.  They rarely even got rain…and now…this?

And of course, remember that while Noah and his family, and all of these pairs of animals survived…nothing else did. Everything and everyone else was gone; wiped out.  What must that have been like? This was not a cute story.  This was not a beautiful “G” rated story.  This story is PG-13…at least.

Now of course, theologians’ debate whether this story was actual, historical fact, or whether it is an allegory meant to teach a lesson about the nature and faithfulness of God.  Ultimately, that doesn’t matter.  The story is the story, and in it, God is communicating important truths about how God views creation, and about how God’s mind, in this moment, was changed.

The part of the story we heard this morning picks up right after these events.  I would like to pay attention today, not to the flood…nor all of the animals…the part that I thinks is most important for us, is at the end of the story.  It is when God says “Nope.  Never again.  Never again am I doing that.  Never again.”

Remember that the story of Noah and the ark doesn’t conclude when the rain stops.  After the water had receded, they landed, and left the ark.  Noah built an altar to God and worshipped.  And then, God then made a promise to Noah, and to all of creation.  God said: “I will never again curse the ground because of humankind, nor will I ever again destroy every living creature as I have done.”

As long as the earth endures,
seedtime and harvest, cold and heat,
summer and winter, day and night,
shall not cease.”

God said “Nope.  Never again.”  Never again will I destroy creation.  All of creation is precious, flaws and all.  From now on, I will protect it.

And as a result of this choice, as theologian Patricia Tull wrote, the story of Noah implies that “divine grace surrounds us.  It’s the air we breathe.  We have never known a moment in which God did not forget evil, sustaining us on pure grace, no moment when we weren’t on some level, getting much better than we deserve.  And we can’t take that for granted.”

God is promising to all creation that God will not destroy the world again.  But God is not saying that the world is perfect.  As long as Noah and his family were on the ark, humans who were broken and sinful, there would still be sin.  Sin too survived the flood.  In fact, there is still sin.

Division…war…pain…suffering…racism…sexism…refugees fleeing violence…discrimination…greed…corruption…anger…the world can feel like a pretty messed up, broken place.

But in the story of Noah is found the promise that rather than destroy and re-create, God will redeem.  God will repair.  God will restore.

I remember as a child, being down in our basement playing with my brothers, and we would fight.  And finally, I’d hear the voice of my Mom or my Dad exclaim “I’m coming down there!”  And immediately, magically, the conflict would end.  And though conflict ended because we didn’t want repercussions, we also knew that Mom or Dad wouldn’t come down there unless they loved us.

God says to us, “I’m coming down there.”  And God takes on the form of Jesus.  But God is reminding us that our response need not be fear.  In fact, he says over and over “don’t be afraid.”  Jesus comes to repair the world…to redeem the world…to restore the world.  And Jesus does that by walking with you and teaching you how to be a follower.

We cannot fulfill God’s law, but Jesus can…and does.

Noah was entrusted with rebuilding the world after the flood.  And after Jesus’ resurrection, we are each the new Noah.  God entrusts us to be faithful…to build a temple and worship, and to re-build the Kingdom of God, right here…and out there.  And, as we often say, it is God’s work, but it is our hands.

At first glance, the story of Noah and the Ark feels a lot like law.  It is a difficult story.

But when we look at where God turns the story, at the shift that God makes, we realize that it is really a story of love and grace.  It is a story of restoration.  It is the moment that God decided that the world…that God’s people…that we…are worthy of God’s redeeming.