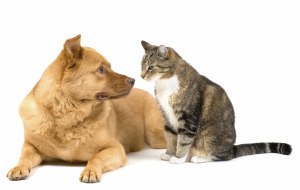 “The Truth About Cats and Dogs”
John 18:33-37
Pastor Todd Buegler
August 22-23, 2015
Trinity Lutheran Church & the Steele County Fair
Grace and peace to you from God our Creator, and from Jesus, the Son of God and King of creation!  Amen.

I have a theory.  It’s very simple.  I believe that there are two kinds of people in the world.  There are dog people, and there are cat people.  Ok…just checking…how many people here would define themselves as dog people?  What about cat people?  How many of you are cat people?

So one way of looking at our own sense of identity is to ask ourselves the question theologically, “am I a dog, or am I a cat?”

And really, if we took the question back even one step further what we have to ask ourselves is really:  “who’s in charge?”

Today, we gather for worship not as individual churches, but as a whole community.  We gather in praise and thanksgiving…in celebration of the Lordship of Jesus, who has dominion over our lives, over our families, our congregations, our community and our world.  We recognize and celebrate Jesus as the King of all Creation.  We acknowledge Jesus as Lord of our lives.  What I have found is that while this is a pretty easy thing for us to talk about, it can be a difficult thing for us to live.  In other words, while we talk the talk of the dog theology, oftentimes we live more like a cat.

We are experts at compartmentalizing our lives.  We say “God, we totally give you Kingship over this part of my life.  But this part over here…I want to maintain control of.”  We are good at giving God dominion over our Sundays…but we want to maintain control of our Mondays-Saturdays.”  Perhaps it’s work life…maybe it’s our family life…or it might be a relationship that we are in…or maybe school life…whatever it is, there are parts of our lives that we tend to hold back from God.

But when we gather to worship, we are reminded that when we call Jesus our King, he is King of all, with nothing held back.  In our culture, we are not used to this.  We value our independence.  We value our ability to make our own decisions.  We tend to rebel against anything that limits us.  We don’t want to be dependent on anyone or anything.  If so, then we think we are perceived as weak.

And we’re not used to the idea of a King.  In our American culture, that’s not language we’re used to.  That’s dog language, it gives authority over to someone else.  We want to feel more like cats.  We want to be independent…we want to be in charge.

But the truth Jesus teaches us is a simple two-fold truth:  First, we are not in charge; we are subject to a King.  And second: our King is good.  In our Gospel text, after Jesus was arrested, Pontius Pilate asked him “Are you the King of the Jews?”  Jesus gives a startling answer:  My kingdom is not from this world.  If my kingdom were from this world, my followers would fight for me.  But my Kingdom is not here.”  Pilate, probably a little confused by this answer asks again “So you are a king.”  Jesus answers “you say that I am…for this I was born and came into the world…to testify to the truth.  Those who belong to the truth listen to my voice.”

To be honest, this is not an easy text.  Jesus isn’t giving a clear, simple answer.  But in this text, I believe that Jesus is defining his Kingdom, and his reign.  He is saying that he is a different kind of King.  He is not interested in the political things of this world.  He is coming to bring a different kind of a monarchy.  He is coming not to rule with armies…he has no interest in rebelling against the Romans.  He is coming to bring truth.  While most Kings had a reign over a geographic region, Jesus’ reign was over a spiritual region.  He is the King of all of who hear his voice, and believe in this truth.  Pilate cannot begin to understand what Jesus is talking about.

Kings get mixed reviews throughout history.  Certainly there have been many, many good and gracious kings.  Likewise, there have been some Kings who were self-serving, or tyrants.

I actually met a King once.  While a student, I was a sound tech at Gustavus Adolphus College, and we hosted the King of Sweden on campus.  I was the guy who, under the close watch of the Swedish Secret Service, got to clip the King’s lapel mic onto his coat.  (I bet you didn’t even know the King of Sweden had a secret service.)  But King Carl Gustav the 16th of Sweden?  He was a nice guy.  I clipped on his microphone and he said “Thank you.”  No pretense; and quite a bit of humility.

The role of a King is not just to rule over people.  It’s not supposed to be about power.  A King is supposed to be someone who “stewards”, or “tends to” the people; who takes care of them and makes sure their needs are met.

In 1940, Nazi Germany invaded Denmark.  Like so many other European nations, this small Scandinavian country was very quickly conquered.  But the spirit of the Danish people and their king proved unquenchable.  Even after the Nazis had taken control of the nation, King Christian the 10th boldly led his people, the Danes, in a quiet but courageous resistance movement.

On one occasion, the King noticed a Nazi flag flying over a public building in Copenhagen. He went to the German commandant and asked that the flag be removed.  “The flag flies”, the commandant replied.  “Request denied.”  “I demand that it come down,” said the king.  “If you do not have it removed, a Danish soldier will go, will climb the flagpole and remove it.”  “Then he will be shot”, said the commandant.  “I don’t think so,” said King Christian, “for I shall be that soldier.”  The flag was removed.

Later, the order came that all Jews were to identify themselves by wearing armbands with the yellow Star of David.  King Christian said that one Danish person was exactly the same as the next.  So the King, who was a Christian, donned the first Star of David.  The next day in Copenhagen, almost the entire population, most of whom were Christians, wore armbands showing the Star of David.  The King, and his people, saved over 90% of their Jewish population.

King Christian the 10th was a different sort of a King.  He may have been born into his position; but ultimately, his people developed a great love and allegiance to him, because of his great love and allegiance to them.  Their loyalty to him had no boundary.  They would have followed him anywhere.  Why? Because the love he had for his people had no boundaries.  Christian the 10th was a different sort of King.  He stood in the gap between his people, and evil; literally between life and death.  He was a King who was a servant.  He was a King worthy of being followed.

As Christians, we understand this.  We know what it is to follow a different sort of King.  Our King didn’t climb a flagpole.  Instead, our King climbed onto a cross, to give his life for his people.  And no matter what kind of boundaries we create…no matter how we try to maintain lordship over our own lives, Jesus reminds us: “no, I am King; over not just a portion of your lives…over all of your lives.”

And our King provides all we have, and all we need.  Every aspect of our lives: the physical, emotional, relational, social, financial.  Everything.  Everything we have belongs to God.  When we take credit for all the things we have, for our salary, for being able to provide for our families, we are denying the Kingship of Christ, who gives all things to us.

But when we recognize Jesus as King and Lord over all, everything changes.  We live into the grace that God provides.  The love of God is a constant, nothing can change that, and nothing can separate you from that.  That is a promise that we receive from God.  But when we live into it, when we learn to recognize it within our lives and in the world around us, when we learn to look at the world through the lens of grace and gratitude, our very being aligns with God’s grace.  Not because of what we’re doing, but because of what God did, through Jesus Christ.  It is, quite honestly, a miracle.

Yes, we all slip into a cat theology, where we are all the center of our own universe.  That is a part of the human condition we call sin.  We love to be in charge…we love to be in control…it is all too often all about me.

With all due respect to cat lovers out there, God calls us into a theology of a dog.  We can say with faithfulness and confidence “You feed me. You care for me. You shelter me. You love me. You must be God!  You are our King!”

The God of grace gives you all that you need…cares for you…gives you shelter in the storms of your life…loves you unconditionally and stands in the gap between life and death, for you.  Our King asks that, with confidence, you trust fully in him.