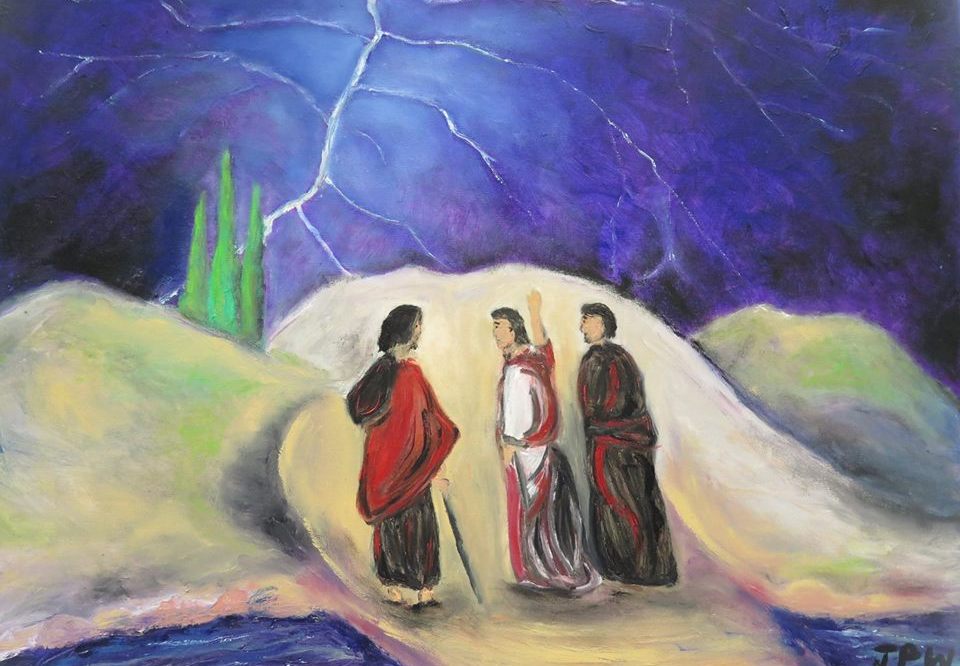 It was probably not the smartest thing I’d ever done.

I was a new college graduate.  One of my best friends, Christopher, had just gotten married to his college girlfriend, Kim and they were moving to Baltimore for grad school.  Chris asked me if I would accompany him, and drive the big rental truck with all their life possessions out there. He would drive his Dad’s pick-up truck.  “Sure, I could do that! I like road trips!”

So on a Sunday night, after spending the afternoon loading up, we took off from Belle Plaine, Minnesota and headed east. This was, of course, in the “pre-cell phone era,” so we’d hooked up CB radios (remember those, good buddy?) so we could stay in touch.

We crossed Wisconsin, we got separated from each other in the traffic of Chicago, we found each other again in Gary, Indiana, and made our way across the Ohio and Pennsylvania turnpikes.

We arrived in Baltimore, unloaded the truck, got about six hours of sleep on the floor of their new apartment, returned the truck to the rental place in Baltimore, climbed back into the pick-up truck and took off.  We took turns, with one of us driving and the other sleeping in a sleeping bag in the bed of the pick-up, all the way back to Belle Plaine. We arrived, just a little over 48 hours after we’d left.  I remember that when I told my Dad about the trip, he said “Wow. That’s a special kind of dumb.”

While we were driving on our way out, I remember how we used the CB radios to keep track of each other, but also to talk, and to keep each other awake.  Chris and I had always been able to step into pretty deep conversations about life, the universe, and everything.  I remember that we talked a lot about his new marriage. Being single at the time, and I mean really single, I was kind of fascinated by the whole idea of marriage. How did they know?  How did they decide to spend the rest of their lives together?

In our middle-of-the-night CB radio conversation, Chris talked about how their relationship had grown over their four years in college…how they loved being together.  And how finally, he knew he should propose marriage when he realized the he couldn’t even imagine a future that didn’t include Kim.

Then over the radio, a new, deep voice suddenly chimed in: “That’s beautiful. I feel the same way about my wife.” And then another voice said: “Yeah, Me too.”

There, in the middle of the Pennsylvania turnpike, at 3am, we suddenly realized, we were not alone.  Later we laughed, and wondered how many truckers had spent their evening accompanying Chris and I, listening to our conversation.

Some of the most amazing moments in our lives, and our faith, some of the deepest conversations, happen on journeys.  Have you ever noticed how some of the best conversations between a parent and their teenager happen in the car?  It’s true.  That’s why we do things like youth mission trips, trips to visit EPES in Chile, Mission Jamaica, and the Luther500 trips to Germany.  Traveling and experiencing together opens doors to talk, to listen, to learn, to be vulnerable, and for God to work.

Our Gospel lesson for today is all within the framework of a journey.  The two disciples were witnesses to the crucifixion, but hadn’t yet gotten word of Jesus’ resurrection.  They were walking from Jerusalem to Emmaus.  Their grief and disappointment had to be almost overwhelming.

The disciples are disappointed in part because they had fundamentally misunderstood how God was working to save the world. Expecting a God of power, they got one of vulnerability. Expecting a warrior God, they got a suffering servant. And while we know how the story ends, their hopes had been crushed. After all, there is no way that God would allow the Messiah to be put to death on a cross, right?

I get this kind of disappointment, and I’m guessing that you might too.  There have been times that I’ve had hopes and expectations crushed.  I’ve prayed for healings that haven’t happened.  I’ve prayed for relationships that have remained broken.  I’ve asked for relief for problems that then haven’t gone away.  And I’ve found myself disappointed in, or even angry at God for what did or didn’t happen.

But that day, for the disciples, Jesus shows up.  Right there.  On the road with them, walking alongside them, accompanying them.  Now to be honest, that could be the end of the story.  that’s where we could end the sermon.  Jesus is with you.  Have a nice day.  Amen.

But there is so much more to this story. Remember that at first the disciples didn’t recognize Jesus.  His identity was hidden from them, so they just talked to him like he was a stranger.

First, Jesus asks them questions. He asks: “what are you talking about?”  They reply “are you the only stranger in Jerusalem who does not know the things that have taken place there in these days?”  And Jesus asks again: “what things?”

When Jesus asks “What things?” the response of the disciples is right on: “Where have you been these last few days, dude? Living under a rock?” Yet, the question “what things?” leads the disciples to articulate what they experienced; to tell their story. They name their hurt, name their fear and name their doubt. And then Jesus picks it up from there and takes it home.

There is power in these moments. Real power. I had a great conversation recently with Corey Michaelson, who owns and operates Michaelson’s Funeral Home here in town.  We were talking about visitations, you know, that take place before a funeral.  He said something that stuck with me. He said that of course it’s important to see people come out to support you when you’ve lost a loved one.  But the real power is in answering the question “what happened?” over and over to all those people who stand in line to comfort you.  What happened?

Jesus’ call, and our hope then, is that this place…this church…this community, is one where there is safe space for us to be honest with each other about our joys and our disappointments.  It is a place where we can tell our stories.  That’s what it is to be in community with each other; to travel together in our faith journey.

The second thing Jesus does in our Gospel is to move the idea of the resurrection from the disciple’s heads, to their hearts.

It was evening, and Jesus was going to leave the disciples. But they  asked him to stay with them.  When the three of them sat down to eat, Luke’s Gospel tells us that Jesus took bread, blessed it and broke it, and then suddenly, the disciples eyes were opened, and they recognized him.  And then he vanished.

They said to each other, “Were not our hearts burning within us while he was talking to us on the road, while he was opening the scriptures to us?”

Up until this particular road-trip, the idea of Jesus as Messiah had existed in their head.  It was knowledge…something that they had been told and understood, up here.

But on the journey, on the road to Emmaus, this idea that they’d understood?  It became a reality that they felt…here. In the teaching, and the breaking of the bread, Jesus moved from their head to their hearts.  It’s only 18 inches from here to here, but sometimes, this short distance can be the most difficult to travel.

The disciples said, “Did you not feel our hearts burning within us?”

When do our hearts burn?  When do we experience and feel the presence of God?

Jesus comes along side us.  Jesus asks us questions and creates space for us to share our hopes, fears and joys.  And Jesus is revealed to us in the community, in the Word, in the breaking of bread and the drinking of wine.